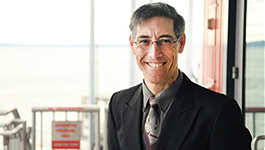 SEATTLE – Eric Abbott is always trying to get an edge, whether at work or racing with his cycling team. That’s the reason he enrolled in Washington State University’s online engineering and technology management program.

“I like putting new tools on my tool belt,” said Abbott, who graduated this spring. “The more tools you have, the better chance you will have to solve a particular problem – and the ETM program has definitely given me a lot of new tools.”

Abbott, 48, wishes he’d had those tools back in 2007 when he was a production specialist at an electronics startup in Spokane, Wash. The firm was working on a new product for the U.S. defense department but ran into major technological problems. Ultimately, both the product and company failed – but that opened a new door and career path for Abbott.

His wife, Barb Chamberlain, executive director of the Bicycle Alliance of Washington and former director of external relations and communications at WSU Spokane, told him about a class offered by WSU’s online ETM program called “Theory of Constraints.”

The course focuses on identifying the constraint in a system and when to exploit that constraint for progress. It delves into the root causes of failure or limitation and provides problem-solving tools and techniques to make good decisions. Abbott knew that was knowledge he wanted, so he enrolled.

“That was my first class in the ETM program,” he said. “If I had known about these principles and techniques, we might not have failed at the startup company.”

Abbott, who changed career paths, said the program was life-changing. One course led to another, culminating in his 2013 master’s degree and ETM graduate certificates in manufacturing leadership and constraints management.

“This experience has really changed my way of thinking in so many ways,” he said. “I’ve learned how to make higher quality decisions, to look at things differently.”

Some techniques he has learned in classes will not only make him a better employee but also a better bike racer. Abbott is a member of the Union Bay Cycling team in Seattle, the Washington State Bicycle Association and USA Cycling. He spends most of his spare time training and competing in road races.

“A technique of lean manufacturing tries to reduce excess waste,” he said. “In the context of road racing, you can have wasted energy by spending too much time pushing the wind instead of drafting behind someone else. Or wasting your capacity by trying to maneuver to a position that doesn’t have a tactical advantage.

“Waste of time and waste of movement can all be analyzed using the principles of lean manufacturing,” he said. “It’s great fun.”

The classes offered through the ETM program, part of WSU’s Global Campus, are online and offered in a live, interactive format. When Abbott moved from Spokane to Seattle, there was little, if any, disruption in his coursework.

“I think one of the biggest benefits of the online program is that you can be anywhere in the world and take the classes,” he said.

After attending WSU’s 2013 spring online graduation reception in Seattle, Abbott is focused on taking his career to the next level.

“There are many job opportunities on the west side of the state for someone with this degree,” he said. “A major manufacturer in the Seattle area recently told me that my degree is of great demand in the industry. I’m confident I’ll find a position where I can use my new skill sets. It’s quite an exciting time.”

He is quick to add that his education isn’t over. He plans to take more ETM courses and continue to “add more tools to my tool belt.”

“I will always be learning something, somewhere, somehow,” he said.